LEAP: The Power of Coaching 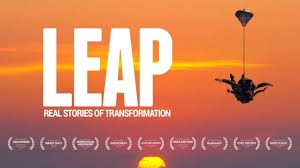 The first commercially produced film on the Power of Coaching, LEAP, is a year-long experimental program following 4 diverse people inhibited by their past. Like many of us, regardless of our background, successes or failures, they are weighted by mental and psychological blocks preventing them from achieving the transformation they seek for an improved life.

With world-renowned coaches across the spheres of relationships, business, life and executive and sports coaching, the documentary aims to inspire 1 million people across the world with its candid and soul-wrenching approach to rediscovering your true self.

One of the most inspiring themes explored in the documentary, which all participants face, is a lack of faith within themselves.

Stacey, a former lawyer and a plus-sized black woman believes that she can recreate herself as a lingerie designer and bend society’s perceptions of bigger women. Not unlike many other women who had created their identity and sense of self around a relationship or partnership, Stacey feels abandoned and alone after a painful breakup.

Soon, a successful Asian businessman wishing to expand his empire is hindered by the possibility of failure and the approval of his father, despite his previous successes.

Gary, a male virgin who chose to remain celibate until he found the right woman, finds himself alone at 43 and must challenge his beliefs on celibacy and relationships.

Rob, a recovering alcoholic, is an Emmy award winner who fell from grace and not only lost all his money but also the respect of his family and peers. One drunken incident completely altered the course of his life and eventually led to his sobriety; which is challenged every single day.

With an outstanding contribution by ‘celebrity’ like professionals and pioneers in the coaching world, the expertise and merit of the 38 Coaches and Mentors in LEAP are undisputed. They have seen the results of their efforts in people’s lives through years of passion and commitment to self-empowerment and healing.

Most fascinating to see is the variant styles and unique approaches each coach uses for their subjects, understanding that our human issues may be universal but our individual needs are more specific.

Some of these standout Coaches include:

Cherie Carter-Scott, known as the ‘Mother of Coaching’ and best-selling author of premier coach training books. She is also the founder of the MMS Worldwide Institute®, the oldest coaching training program in the world.

The author of Men are from Mars and Women are from Venus, leading relationship expert John Gray teaches both sexes how to understand, appreciate and respect each other, personally and professionally.

The originator of the Chicken Soup for the Soul series and known as ‘America’s #1 Success Coach’, Jack Canfield focuses on professional development and business strategies for success.

Dedicated to helping people live more successful lives through happiness, success and unconditional love, Marci Smith is one of the world’s top-selling non-fiction female authors. With titles such as Happy for No Reason and Love for No Reason, she is also the co-author of the self-help phenomena, Chicken Soup for the Woman’s Soul series.

A few other experts include:

With such diversity of experience, skill and expertise, the countless themes and approaches used in the film, invaluably shares some of the key insights into human behavior and the internal conflicts we battle with.

The Masters of Coaching Package

In addition to the movie and to further impact people’s lives, the documentary is accompanied online by 12 complete in-depth coaching video sessions with individual cast members and their elite coaches.

Delving deep into the psyche with self-reflecting techniques and a myriad of healing tools, these sessions provide invaluable lessons for us all to implement in almost every area of our lives. It is intense, moving and filled with sage yet practical advice rarely found in complete self-help or coaching experiences.

Where is the film available?

Available for viewing on Itunes and Amazon, you can also apply to host a screening at a film festival, local cinema or event. Released in 2017, LEAP has yet to achieve its 1 million target and through this unique method of distribution continues to expand its viewership.

Taking the Leap, the book released after the film is now available on Kindle.

Take the leap – get the book!